Enjoy the real life locations that have appeared on the big screen on this driving tour! Los Angeles’ known for its entertainment, being home to well known actors, and its amazing pop culture history. On this tour, you will be taken to classic Hollywood haunts around the City of Angels, all the while learning about some of its beloved shops and restaurants!

from Private Driving Tour of L.A.'s Iconic Movie Moments
Your tour starts at the heart of La La Land on Hollywood Boulevard – home to the star-studded Walk of Fame, and Capitol Records, brilliantly demolished in The Day After Tomorrow. Then, you’ll see Johnny Depp's Viper Room, the Playboy Mansion, and the luxury hotel Chateau Marmont.

You’ll venture through Beverly Hills and see the Beverly Wilshire Hotel from the film Pretty Woman. Then see the Greystone Mansion which has featured in nearly 100 films over the years including Eraserhead, The Witches of Eastwick, Death Becomes Her, Batman & Robin, and The Bodyguard.

See where Queen Latifah and Steve Martin were filmed dancing in Bringing Down the House and see the iconic Bradbury Building which has been used in countless shows, films and music videos. Lastly, you’ll visit Griffith Park where you'll see the Greek Theatre, which featured in the comedy Get Him to the Greek. From here soak up the stunning views across the sprawling city before being dropped off at your hotel.
Read More 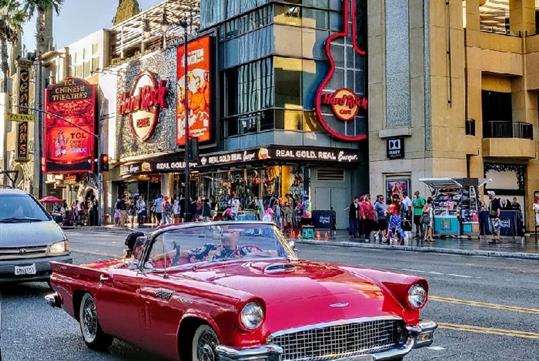 View Map
Back to Top

We accept a variety of payment methods for your convenience:

We are here to help:

Don’t take any chances with your trip. Whether you need assistance booking, helpful details for you to be prepared, or need to make a change, our knowledgeable and helpful customer support team is prepared to assist you.

By Phone: 1-800-590-8125
8 AM to 5 PM Central Time 7 days a week
Email Us:
customerservice@tripster.com
Have General Questions? You can view our FAQs for possible quick answers.